Someone is having a laugh – are we all being taken in by this farce? All Hirst needed to do for the second pickling was to officially ’sign it off’ as his work even though others did the actual work. So my understanding of conceptual art is someone has a weird idea, when possibly off their head on some kind of substance, they get an artisan to create said piece and hey presto – they get the big chunks of money as a reward for being thoroughly daft and masses of publicity citing them as being in the category of genius.

So I thought I would have a go at this kind of art as it seems to get far more attention than something that actually involves craftsmanship and skill. At first I started collecting beer cans that had been run over – I’ll stick them onto a scruffy piece of rubbishy plywood and entitle it ‘road-kill’ – perhaps add a squashed badger! You know the thinking –  ‘drink/drive/dead wildlife’ – do you get it? I gave up on this idea and threw away the beer cans because I just couldn’t bring myself to pick up a dead badger without flooding it with tears.

The other day while enjoying the pleasure of our newly whitened walls of our folly by the seaside I noticed that the house martins were beginning to gather to take up residence again on our home. 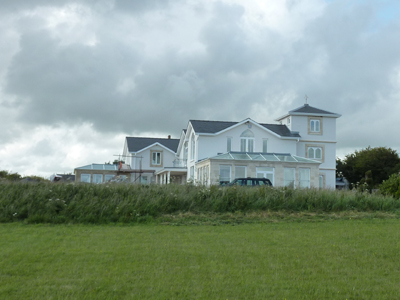 Nice clean white building – just visible at the peaks of the roofline and above the Bath stone window surround on the tower – dark blobs of nests.

My beautiful white walls versus the joy of the birds – so conceptual art became a solution. I, the artist, had the idea and provided the materials – the artisans were to be the birds themselves. So I scrounged some different coloured pottery clay from a local potter and put blobs out in the house martins’ mud puddle – every year we keep this puddle wet enough to save them the journey down to the marshes. Designer nests we would have that would blend better with the white building. However the birds wanted to be artists themselves – so they carefully mixed up the colours and created a nest with only a very delicate change in colour – all tones of brown with the base part of the nest being quite a bit darker because that is what they started with before I interfered with their materials. 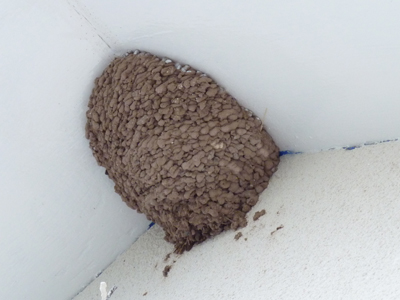 Note slight change in colour as the build progressed with odd touches of white/grey around the rim. We had to halt the final coat of paint and fixing the outside lights so that we did not disturb the build schedule. 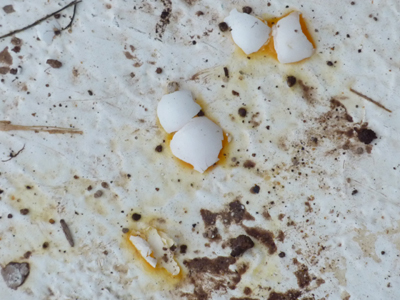 Tragedy – bad foundations – nest collapsed – now if I enlarge this and put a fancy price tag on it – will that cement up the holes in the domestic coffers? Is that a dog in the foreground – bikini tops with fake tan leaching out? Get a grip girl – go back to the frocks!