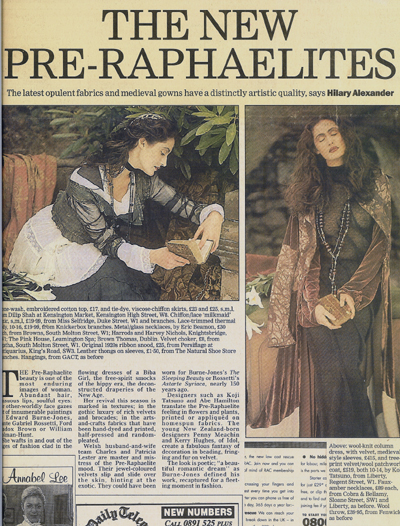 The Pre-Raphaelite beauty is one of the most enduring images of woman. Abundant hair, sensuous lips, soulful eyes: her other-worldly face gazes out of innumerable paintings by Edward Burne-Jones, Dante Gabriel Rossetti, Ford Madox Brown or William Holman-Hunt.

She wafts in and out of the pages of fashion clad in the flowing dresses of a Biba Girl, the free-spirit smocks of the hippy era, the deconstructed draperies of the New Age.

Her revival this season is marked in textures; in the gothic luxury of rich velvets and brocades; in the arts-and-crafts fabrics that have been hand-dyed and printed, half-pressed and random-pleated.

Welsh husband-and-wife team Charles and Patricia Lester are master and mistress of the Pre-Raphaelite mood. Their jewel-coloured velvets slip and slide over the skin, hinting at the exotic. They could have been worn for Burne-Jones’s The Sleeping Beauty or Rossetti’s Astarte Syriaca, nearly 150 years ago.

Designers such as Koji Tatsuno and Abe Hamilton translate the Pre-Raphaelite feeling in flowers and plants, printed or appliquéd on homespun fabrics. The young New Zealand-born designers Penny Meachin and Kerry Hughes, of Idol, create a fabulous fantasy of decoration in beading, fringing and fur on velvet.

The look is poetic; “a beautiful romantic dream” as Burne-Jones defined his work, recaptured for a fleeting moment in fashion.