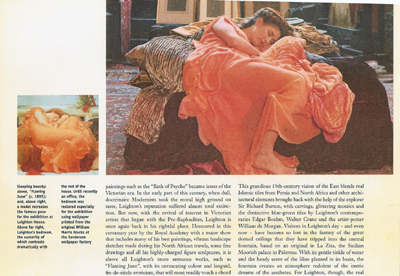 Leighton House, the home of Victorian painter Lord Leighton, is being brought to life for the centenary of his death. Stephen Calloway steps back in time.

The notion that artists’ houses are almost sacred places was one of the most delightful aspects of that curious late-19th-century cultural phenomenon, the Aesthetic Movement. “Art for art’s sake” was the cry, the cultivation of artistic sensibility and intensity became the great ideal, and artists led the way in pursuit of beauty in both art and life. Among the aesthetes Oscar Wilde, posing in velvet knee-breeches and lily in hand, was then an easy target for ridicule. William Morris’s vision of “the house beautiful”, one of the cornerstones of aesthetic belief, proved an altogether more practical ideal, enduring well into the present century. But who today talks of beauty? Well, it was a compelling ideal, and its time could be about to come again.

In 1896, a century ago this month, the great classical painter Frederic Leighton, one of the most eminent of all Victorians and a champion of the aesthetic cause, died, still at the height of his powers and weighed down with honours. He had been President of the Royal Academy for almost 20 years and, shortly before his death, Queen Victoria raised him to the peerage – the only painter ever to be thus dignified. As the most conspicuous grandee of the art world and something of a swell, Lord Leighton of Stretton moved with equal ease in the studios of his Bohemian friends and through the grandest drawing rooms of the land. He was called “prince of aesthetes” and from the remarkable studio-house that he built in a commanding position on the slopes of that Victorian Olympus, Holland Park, he looked down, Zeus-like, upon the London art world.

In his heyday, Leighton’s grand mythological pictures, his vision of the ancient world or of Renaissance Italy and his highly idealised male and female nudes were justly celebrated. Queen Victoria bought his first major work, the colourful procession picture “Cimabue’s Madonna”, while paintings such as the “Bath of Psyche” became icons of the Victorian era. In the early part of this century, when dull, doctrinaire Modernists took the moral high ground on taste, Leighton’s reputation suffered almost total extinction. But now, with the revival of interest in Victorian artists that began with the Pre-Raphaelites, Leighton is once again in his rightful place. Honoured in this centenary year by the Royal Academy with a major show that includes many of his best paintings, vibrant landscape sketches made during his North African travels, some fine drawings and all his highly-charged figure sculptures, it is above all Leighton’ s most sensuous works, such as “Flaming June”, with its coruscating colour and languid, fin-de-siècle eroticism, that will most readily touch a chord for a new generation of aesthetes.

In many ways, though, Leighton’s most enduring legacy will always be his home. Leighton House is a most remarkable survival. Begun in 1864, the original house, with its studio and single, rather austere and gloomy bedroom, was built to the designs of Leighton’s friend and fellow Academician George Aitchison. It was Aitchison, too, who later masterminded the creation of the Arab Hall, the stately pleasure dome for which the house is now most famous. This grandiose 19th-century vision of the East blends real Islamic tiles from Persia and North Africa and other architectural elements brought back with the help of the explorer Sir Richard Burton, with carvings, glittering mosaics and the distinctive blue-green tiles by Leighton’s contemporaries Edgar Boehm, Walter Crane and the artist-potter William de Morgan. Visitors in Leighton’s day – and even now – have become so lost in the fantasy of the great domed ceilings that they have tripped into the central fountain, based on an original in La Zisa, the Sicilian Moorish palace in Palermo. With its gentle tinkle of water and the heady scent of the lilies planted in its basin, the fountain creates an atmosphere redolent of the exotic dreams of the aesthetes. For Leighton, though, the real heart of the house was the great studio on the first floor, the place in which he worked, but also the scene of his famous musical soirées and parties.

The studio and the rest of Leighton House are extremely revealing of the tastes of the foremost artistic bachelor of his era. Just as today, when certain artists hit the big time in our cultural lottery of taste, so too in the 19th century a number of the major figures of the day made considerable fortune from the sale of their work. Many built lavish studio-houses for themselves, filling the vast spaces with opulent arrangements of curious old furniture, rich textiles and Persian carpets, sculptures, pieces of armour and costumes. All these things were ostensibly gathered as “props” to help in the creation of authentic historic scenes, but in reality the building and decoration of one of these “palaces of art” became an ambition in itself. Sadly, hardly any of these houses survive in anything like their original state. Leighton’s possessions were scattered on his death and, although photographs document the appearance of the rooms, the real sense of aesthetic clutter – those extravagant heaps of pictures, rugs, pots and stuffed peacocks – seemed lost forever until the recent refurbishment of Leighton House for the centenary celebrations.

From 16 February, a special exhibition at Leighton House will focus on the way the painter lived and worked. For a few weeks the usual museum atmosphere will be banished and the place will be brought to life with an ingenious recreation of the look of the rooms in Leighton’s day. The studio and other rooms will be “set-dressed” using period furniture and other authentic objects borrowed for the show. All have been carefully tracked down for their resemblance to Leighton’s original possessions, but because they are not valuable “museum pieces”, visitors can wander freely amount them. They can even tiptoe around the sleeping form of a model curled up in a cocoon of orange silk. She represents Leighton’s muse Dorothy Dene posing for “Flaming June”.

A series of special events will include lectures and concerts based on Leighton’s own musical evening parties, which used to cause congestion around Holland Park as the capital’s great and good arrived in their carriages. Most intriguing of all are the theatrical promenade presentations that will be staged several times a day throughout the month. Part guided tour and part dramatised biography based on the rich archives of Leighton’s life, these use actors’ voices to lead visitors from room to room, listening to the painter and his friends reminisce about his career, gossip about his circle, and reflect on the lofty themes of aestheticism and art. As an experiment in the way historic houses are presented to the public, these theatrical tours and re-inhabited rooms are innovative. What is on offer here is a more than usually palpable evocation of a figure from the past, a glimpse of his artistic ideals and an insight into a life spent in the pursuit of beauty. Catch it while you can, for beauty is a fleeting thing.